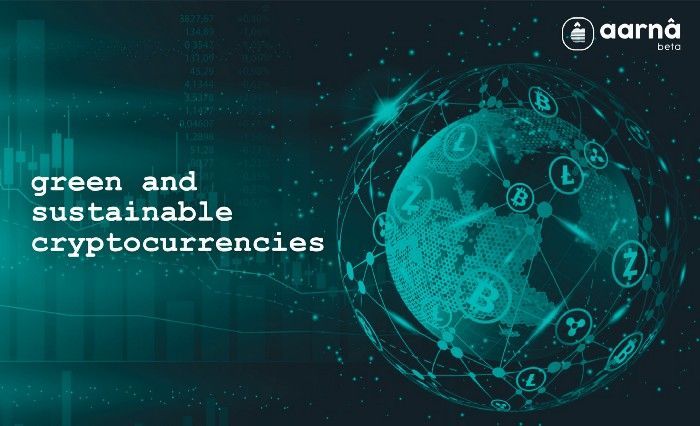 When Elon Musk declared that Tesla would stop taking Bitcoin payments owing to the environmental impact of mining, green cryptocurrencies surged into the news at the end of 2021. According to the Cambridge Bitcoin Electricity Consumption Index, the amount of electricity consumed by bitcoin mining in a year could boil enough water for all cups of tea drank in the UK for 30 years.

But it is only fair to do that, isn’t it? As nature is in alarm mode, we need to take more environmentally friendly steps.

But what are Sustainable Cryptocurrencies?

Due to the abundance of computing required, cryptocurrency mining is a process requiring a lot of energy. Alternative models with a low environmental impact have been introduced to cut emissions connected with the first digital currencies: the so-called green cryptocurrencies.

Green cryptocurrencies are built on breakthrough processes that decrease blockchain technology’s carbon footprint. So many of these aspects can also be applied to existing, more damaging cryptocurrencies in the search for more sustainable approaches. The same is the case with Ethereum, the technology that powers most non-fungible tokens (NFT), which promises to use a Proof-of-Stake (PoS) consensus method to cut its energy consumption by 99.5 per cent.

What are some emerging Green Cryptocurrencies?

Bitcoin mining consumes a frightening amount of fossil fuels, as per environmentalists. There are, however, alternative, ecologically responsible cryptocurrencies that inflict less harm to the ecosystem. These could help alleviate some of the concerns about cryptocurrencies and the environment.

Smaller currencies may have a lesser carbon footprint than more famous ones, but this could simply be due to fewer transactions. However, some digital assets are more energy-efficient, which means they have a minimal environmental impact.

So, let’s have a look at some of those energy-efficient cryptocurrencies that are gaining traction these days:

Rather than the mining, proof-of-work approach used by bitcoin, which relies heavily on computer processors, chia’s “farming” operation uses hard drives — a phenomenon known as proof of space. Chia, according to TRG Datacenters, is a stellar example of sustainable coin crypto designed to be much less energy-intensive.

The Chia Network is a blockchain and smart transaction framework that helps everyone run a decentralized network utilizing available hard drive space. The Chia Network uses proof-of-space-time rather than proof-of-work. XCH, Chia’s token, can be obtained by storing a particular quantity of data for a certain duration of time. XCH was established in 2017 in response to the increased energy consumption of cryptocurrency mining.

Unlike all the other cryptocurrencies, Chia was created by the pioneer of BitTorrent, Bram Cohen. People sought to purchase more storage space on which to farm XCH when the platform was introduced, limiting the availability of hard drives in China.

IOTA, as a cryptocurrency, has not been as price erratic as many other tokens. But it has been frustrating for investors looking for the same returns as early Bitcoin, Ethereum, or other altcoin purchases. Because IOTA leverages Fast Probabilistic Consensus for consensus and only requires Proof of Work in part, the network’s overall energy consumption is significantly small.

Burstcoin was rebranded as Signum in June 2021, and its symbol was changed to SIGNA. Following a substantial decline in the value after the currency was taken off the market from Poloniex in May 2019, a hard fork has declared the original Burstcoin useless.

Burstcoin was perhaps the first blockchain to leverage Turing-complete smart contracts, which allow non-fungible tokens (NFTs) to be formed and used in on-chain games. Since it has been utilizing Proof of Capacity rather than Proof of Work since 2014 and recently upgraded to Proof of Commitment with the launch of Smart Tokens, Signum is likely to remain one of the most environmentally friendly, sustainable cryptocurrencies.

The world of blockchain and DeFi is growing each day and creating milestones with each step. The fact that we have the option to explore green and sustainable cryptocurrencies is mindblowing in itself. So our suggestion to you would be to go green!